For this questionnaire, the date in the first image should be changed to 1960, and instead of the computer insert a pencil as Steve Jobs was only five years old and Al Gore had not invented the internet yet.

1. What was your favorite band in high school?

I was in high school before the bands started.  It was singers and groups we listened to, Elvis, Connie Francis, Dion and the Belmonts, The Everly Brothers. A big favorite was At The Hop and we danced our asses off to that one, doing The Hop.

2. What is your favorite band now?

Steely Dan… I bought their first album at the original Tower Records, stoned on Mickey’s Big Mouth and marijuana brownies that my sister had made… I’ve seen them in concert eleven times over the years, but I will never see them again, at least not the same way. This was the first song I heard and still my favorite.

3. What was your go to “make me feel better” food in high school?

I don’t know, probably cheeseburgers and fries that we got during lunch hour at Harvey’s Drive-in, when there really were drive-ins, one of the rich kids I knew had a ’57 Chevy and we would pile in and go for lunch. I remember on Fridays, the Catholic kids had to have fish burgers, while we had hamburgers, they hated us on Fridays. 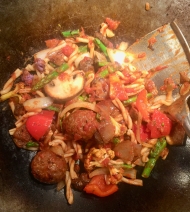 I didn’t really understand this question, so I looked to some of the other people answering this questionnaire for guidance.  Now I get it, and found the perfect response at Frisky in the 916, so I will just go with Jack’s answer.

I have no clue. At my age I am lucky to remember yesterday. Most likely at my computer reading my some of my friend’s sex blogs.

TMI Tuesday blog… to see other’s answers and add your own if you like.

I’ve seen TMI before and my friend May encouraged me to take part, after I had commented on one of her stories to a prompt by TMI.  I don’t usually do question things, but liked this one, as it brought back some memories. I really liked the Create a Story you did, TMI, so if you are listening, please do another, that’s the kind of thing I like to write.

2 comments on “Past & Present”

This entry was posted on November 21, 2017 by Life of Elliott... in Memoir, TMI and tagged TMI Tuesday blog.