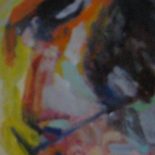 I Visit Carla… a page from Sue’s Diary 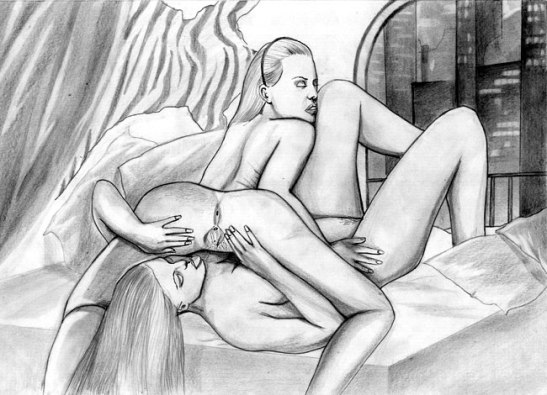 I used just the tips of my fingers to caress all of Carla`s pussy. She moaned and writhed, moving her hips and trying to push against my soft, whispery touch. It was obvious that she was in dire need of relief, and I would be only to happy to give it to her, in time.

A drop of clear, warm fluid formed on the end of one of Carla`s pussy hairs. It held my attention for a time and finally I put the end of my fingernail against this perfect sphere and the tiny drop flowed over my finger and I put it in my mouth. Even though it was too small to taste, I took it all in, as from a goblet.

This was the moment I`d been waiting for. I slid down on the bed, positioning myself between her legs, and breathed deeply to take in the perfume of her pussy. I was about to put my tongue there when Carla said,

“What are you going to do?”

I was surprised, “I`m going to lick your pussy,” I said.

The expression on Carla`s face told me that she didn`t really believe what was happening was real, “Wow,” she whispered, “this is like a dream.”

“Oh no,” she said, “it`s just that….well, I`ve never had my pussy licked before by a woman. I`ve seen videos, and I like the idea, but I`ve never had it done to me.”

“Not even by your Geoff?”

I touched lightly, probing with the tip of my tongue. Carla`s pussy tasted good, I ran my tongue over the roof of my mouth, savouring it. She meanwhile, was going almost crazy at this first touch, groaning and moving on the bed. Just you wait darling, I thought to myself. If that excited you, I`m going to put you in the next dimension when I really get going.

I went up and down on either side of Carlas`s clit, which was huge and stiff. Then I touched it directly, at first softly, then with more force. I licked and lapped at it, while she moved her hips to keep in contact.

“That`s so lovely,” she whispered, and her eyes were tightly closed. Her hands opened and closed into fists as she writhed slowly on the bed.

“Just wait,” I said, and returned to her pussy. I licked the entire length of it, slowly, and used my tongue to probe inside the hole that was so juicy and feverishly hot. I moved to lick lightly and quickly at Carla`s arse hole, then back up to her pussy. The hair tickled my cheeks and I breathed in deeply.

Although I had eaten many women, many, many times before, this one was special beyond words. I had never seen anyone react the way Carla did. Rather than just accepting it, She was almost in a dreamlike state, hardly daring to believe that someone was actually doing this to her – actually licking her clit, pushing inside her vagina with the tip of a hot, wet tongue. She was obviously fighting with herself, trying to stave off an orgasm so that she could enjoy the build up for as long as possible. At the same time she was thoroughly enjoying every touch, every thrill that my tongue was producing. My mouth was glued to her pussy, but I never took my eyes from her face.

I made the effort of my life with this one. I licked as smoothly as I ever had, tickling all the right spots and lingering in the areas Carla indicated with her moans as being extra sensitive. I sucked her hard clit in between my lips and she bucked so much that I had a difficult time staying with her, but I managed to. I was not giving up this delicious pussy, no matter how much she moved.

“Oh, that`s so good !” she moaned, her head moving on the pillow.

Through a mouthful of pussy I said, “Lick what?”

“Lick my cunt !” Carole gasped, and I almost came myself.

I buried my face between her thighs and listened as Carla carried on, almost a chant, “ Lick my pussy, suck my cunt, lick my clitty!”

I took this opportunity to lap up all the juice that Carla`s hot cunt had let slip out, and it was warm and sweet. I savoured it like wine. Carla, meanwhile, trembled spasmodically at this further touch of soft tongue on hard clit.

“Unbelievable !” she managed to gasp.

Another page from Sue’s Diary… Since Sue didn’t furnish a photo of her and Carla, I went on a search for something sexy and fun. I found this image at Dirty Cartoons Photos.